Wind, wind and more crazy wind! Can it be windier during a contest? No, I don´t think so. After the World Cup in Portugal I signed up for my first port tack wave World Cup in Pozo. I flew down from Norway to Gran Canaria without knowing what to expect. I have not sailed much with wind from the right side in waves, and arriving 1 day before the contest I took it as a learning week. My new 3.0 Severne Blade sail and Starboard UltraKode 76 litre arrived just before the contest. With wind gusting 51 knots I had to compete on 3.0 for the first time of my life. A few times I have sailed 3.6, but I normally hold on to my 4.0 until 40 knots while being on my freestyle gear. But in Pozo that would be impossible, IMPOSSIBLE! Day one of the contest was extremely windy and we started the first heats.

I was up against wave sailor Sarah Hilder from the UK. She has some really good wave ride skills, so I thought I would not have much chance to win with my lack of wave experience. But to my surprise, I manage to land backloops on port tack in this wind and some forwards to fill in the jumps. With some okey wave rides I won the heat.

In the contest, we would be judged with 2 jumps and 2 waves. Heat duration was 14 minutes long. A wave heat felt super relaxing compared to freestyle heats with 8 moves for 7 minutes. I was really enjoying the contest sailing but lost in the 2nd round against the winner and multiple Wave World Champion Daida Moreno. With no ranking, I knew I would have to sail against the best ones in the first rounds. I put together a solid heat with forwards and backloops, but still had no chance against the wave Queen Daida. In the double elimination, I won the two next heats and lost in the 3rd round against Lina Erpenstein with a heat I was not very proud of. I ended up on a 9th place, which was way better than what I could dream of ahead of the contest with 24 riders. A great experience and I will come back next year again to raise my level in the waves!

After the World Cup in Pozo, Sarah-Quita and I took the ferry over to Fuerteventura and got ready for the main thing; the freestyle World Cup.

We started the competition and finished one single elimination. I ended up on a 3rd place with a very close heat losing the final spot in the last seconds to Maaike. It was crazy windy and gusty, and we did not have a very good heat missing two moves. I was almost happy to end on 3rd place in the single so I could first try to defend my 3rd place and be ready and “warm” for the fight for the 2nd place in the next double. But somehow the wind never showed up again and we had to stay with this result. So for me, it was 3rd place in Fuerteventura and 3rd overall in the PWA Freestyle World Cup. This year was a close battle for 2nd place. Super motivated to push harder and start the training for the next season. Congrats to Sarah-Quita Offringa, Maaike Huvermann and Arrianne Aukes for 1st, 2nd and 4th place. You are Legends and it’s always cool to compete with legends! Thanks to all my sponsors who make everything possible! Happy to end up on the podium for the last 5 years. 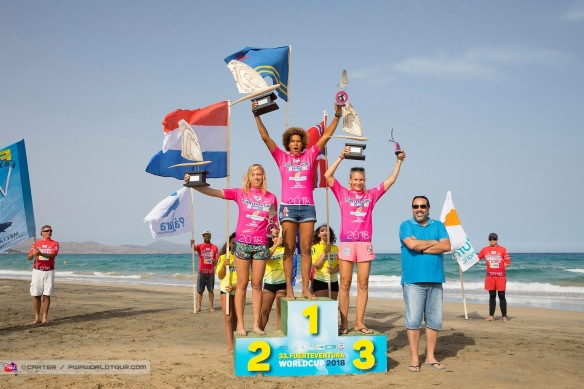 Below you can read the PWA Report:

The final day of the Freestyle at the 2018 Fuerteventura PWA Grand Slam didn’t provide the explosive finale we were hoping for with the wind only briefly kicking in, before dropping again, meaning there were no changes to the men’s and women’s rankings.

Sarah-Quita Offringa (Starboard / NeilPryde / Maui Ultra Fins) extends her incredible unbeaten run on the Women’s PWA Freestyle World Tour to 11 years after winning both events this year to claim her 11th Freestyle world title. The 27-year-old continues to raise the bar for women’s freestyle, and in a year where it was thought she would face her biggest test yet to regain her world title, Offringa has more than risen to the occasion and is still undoubtedly the Queen of Freestyle.

This season there has been almost nothing between Huvermann and Johanne, but it is Huvermann who walks away with a second place to be crowned vice-world champion for the 3rd time in her career, but a coin flip could’ve almost decided that, such was the closeness of their battles.

Arrianne Aukes (Fanatic / Duotone / Maui Ultra Fins) couldn’t trouble the top 3 this time around, but the 31-year-old proved far too strong for the rest of the fleet, which sees her secure 4th place in the overall rankings ahead Johanna Rümenapp (I-99 / Gun Sails / Maui Ultra Fins), who finishes 5th in her debut season.