Every windsurfer, surfer, mountain biker or kiter should at least once in their life go on a road trip and just do awesome things! Being on a road trip, camping around at different spots every day is a different kind of travelling. You have the opportunity to discover more places and spots that would be harder to find if you are flying to your destinations. Another good thing is that you don’t need to spend time convincing the airlines that your windsurf bags aren’t to heavy or have too big dimensions. You just pack your car and drive away!

The 16th of May I went on a road trip with my boyfriend Håkon. We packed his car, an old Volkswagen 1997, with freestyle and slalom gear. We had three weeks to drive wherever we wanted and the only thing that was our plan was to drive to the wind! Believe it or not, the car made it all the way without any problems. 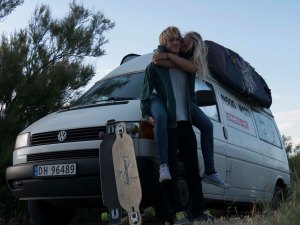 Our home for three weeks 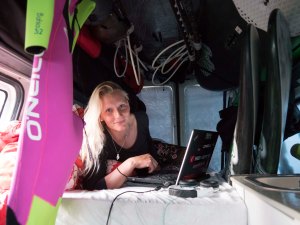 On our first day we drove and scored a nice session in small waves in Varberg in Sweden. Not a bad day to celebrate the Norwegian national day the 17th of May! There were a lot of sailors on the water and a big amount of Norwegian friends sailing there too! It was cool to see Markus Rydberg, the local wave sailor, rip in the waves. A nice guy that is really serious with his training – I like that! 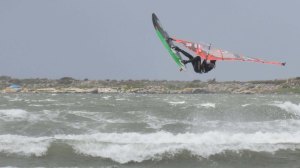 Some airtime in Sweden 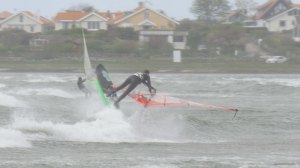 Shaka in the wave

After a day in Sweden we drove straight to Amstelmeer in Holland and had a great time at the super flat spots around the area with our friend and local freestyler Danny Kater. 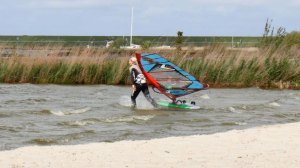 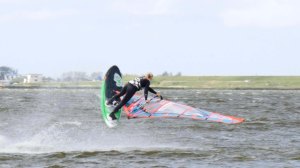 When we had sailed a whole day in Holland the forecast in Leucate (south of France), started to look extremely promising. It’s a far drive from Holland to the south of France, but we decided to go for it. And what a week!!! More than a week with wind between 25-60 knots! One day we couldn’t even sail as it was too windy! That feeling is almost worse than having no wind, since you feel like you’re wasting it! But it was so windy I almost thought the car was going to flip around at some times. 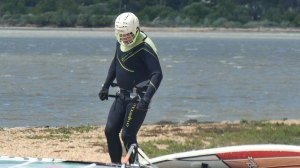 Remember to use protection =) 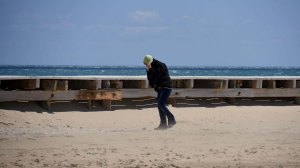 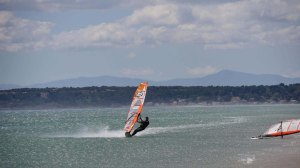 In France we sailed different spots every day, in the lakes and at the ocean. Luckily we have a French friend, Gerald, who always told us where we should sail every day to get the best conditions. My most used sails in France were overpowered Severne FREEK 3.6 and 4.0. I was mainly training burners there and it was really cool to sail out of half of my tries. It’s much easier there with the dead flat water and super strong wind! As soon as the wind drops or more chop, the move is suddenly way harder to land. So I need some more training on that. 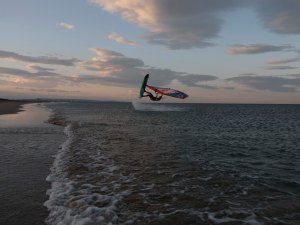 When we had spent a bit more than a week in France the wind was gone, so we drove back to Holland with a good forecast ahead. We got a whole week with wind there. So lucky with the good timing. The highlight of the trip were the days we spent in Brouwersdam. Here we sailed with the Starboard and Severne teammates Dieter van der Eyken and Maaike Huverman. The wind was really good for 4.4. I love this spot as the pool is really small so you get a lot of tries, which means the session gets really intense. The spot outside the pool is also fun with nice chop to do some tricks off. My plan is to go back there in October to participate in the EFPT (European Freestyle Pro Tour) in freestyle. 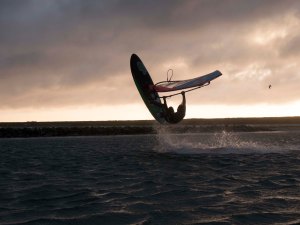 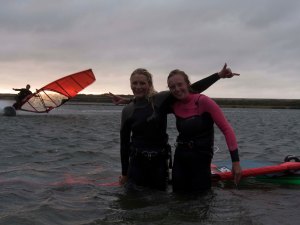 Timed flied really fast after a week in Holland and soon it was about time to drive towards Norway. On our way we had a pit stop in Denmark and got a sweet slalom session close to the bridge between Denmark and Sweden. Here we randomly met some friends we had spent time with in Brazil two years ago, so that was a great reunion with Andreas Larsen and Karl-Søren! 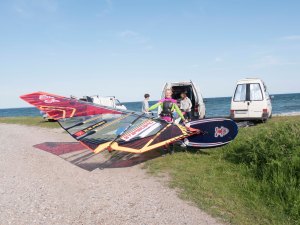 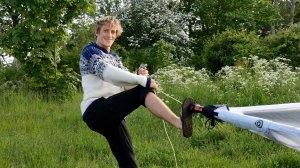 Håkon getting ready for some slalom! 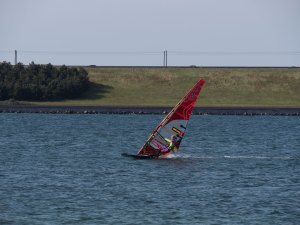 After this day we headed back to our homespot Ørekroken in Norway since the forecast was EPIC. It was so windy that day. Small jumping waves and 3.6 out of control! The next day we went to another homespot Larkollen and sailed the whole day. The parking lot was completely full of windsurfers and it was a good atmosphere at the beach. We sailed so many hours, so I was pretty tired on the last day of our road trip!

We`ll definitely do plenty more road trips in the future, as it was such an awesome time! We had wind every day, except the days we drove, so we are thankful to the wind gods!
Thanks to everybody we met and hope to see you again next year! 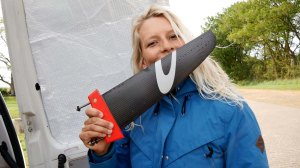 In a few days I’m flying to Fuerteventura to train two weeks before the PWA Freestyle World Cup kicks off. Time for some action!